The Den of Antiquity - Be Charitable - Get Your Copy Today!

READ ALL ABOUT IT! ANTHOLOGY TO DONATE ROYALTIES TO DISASTER FUND!

With today's release of The Den Of Antiquity you can not only entertain yourself, but also make a contribution to a worthy cause. The collaborative opinion when we at the Scribblers' Den decided on a new anthology, was that any money made should go to a charity to be decided closer to the date. As one of our Scribblers' Den members actually lives in Haiti and has first hand experience of the destruction caused by Hurricane Matthew, the collective opinion was that the International Red Cross will receive whatever royalties we earn in order to help people who literally have been left with nothing more than the clothes they stand up in. Watch the video below to see what you will be contributing to if you buy the Den of Antiquities today.

READ ALL ABOUT IT! THE SECRETS BEHIND THE STORIES IN THE DEN OF ANTIQUITIES!

A den is a snug place to curl up with a book, or a place close friends gather to discuss ideas. The Den was the theme of our second anthology, each story had to include a den of some kind. I asked the other members of the Scribblers' Den if their stories were unique - specially written for the anthology or if they were offshoots from other books involving familiar characters. Here's what they told me.

Jack Tyler
When Bryce [Raffle] announced the second anthology, and offered such a generous lead time to get a story ready, I decided to try my hand. I'm one of those guys who always has the ready quip, the snide remark, the titillating double-entendre, to the point that it is often suggested by people who know me personally that I should write comedy. Here, I thought, was a golden opportunity to try. What could be funny, and involve a den? My mind lit on a couple of con men, Laurel & Hardy types, who decide as their next scam to set themselves up as a sort of Victorian Ghostbusters. Now, what might happen to these guys if they ran into a real ghost?

I'm pretty sure I missed the mark on comedy, but the fish out of water story seems to work well. Did they see a ghost or didn't they? Or were they convinced by the spooky atmosphere and their client's panic? You decide. Brass & Coal was a rejected name I submitted for a writing group I was in a long time ago, and had it handy to recycle. This is the first time these nitwits have appeared on the page, but I can't guarantee it will be the last. We'll have to see how their debut is received...

Alice E. Keyes
My story for Den of Antiquity is the third story with the characters Nanna and Yggdrasil. The first time these two appeared was is a 100-word flash fiction story that is on my blog (http://aliceekeyes.blogspot.com). I then used them for the Den's first-anniversary tea party contest of 250 words. These stories were turned into the Den's first ebook (Denizen's of Steam). I felt it was only right to continue writing about Nanna and Yggdrasil for this anthology.

The names come from Norse mythology though more importantly, these are two strong women who antagonize each other. I want their stories to be about small battles each character has internally that are reflected in each other. I'm always surprised by where they take their stories and always look forward to writing a Yggdrasil/Nanna story. They are an adventure for me to write and I hope that adventure comes through in their latest tale.

Neale Green
The Reluctant Vampire was originally intended to be a one-off short story for the Den of Antiquity Anthology. I went into it with the intent of being something totally different from the Daemon series of novels.

As such, I came up with an idea and knocked it out in a few days, then made a couple of adjustments as people picked up on points that I'd forgotten about some elements of the back story.

Strangely enough, I had people asking whether it was going anywhere and that idea appealed to me, so I took it up where The Reluctant Vampire finished, with the central character heading off to the Americas before he got caught. With that, the story became Strigoi Doresc, or the Unwilling Undead.

While the first chapter was based mostly in London, from 1888 on it moved to New York. The story is a work in progress and other characters will be introduced as it develops, but I was side tracked onto other stories while I waited for inspiration for this story to return.

David Lee Summers
Professor Maravilla invents large, rabbit automata to work as harvesters in The Brazen Shark. He calls them jackalopes because they have large, antler-like antennae that allow them to be controlled remotely. These jackalope harvesters were inspired by seeing stuffed jackalopes at roadside stops when I'd travel across the United States with my family as a kid. For my story, I imagined what would happen if an outlaw got control of one of these harvesters and used it to commit crimes. Of course, Larissa goes on his trail to put a stop to these shenanigans!

The den of my story was actually invented for another tale of Larissa and the Professor I wrote about three months earlier. I'm pretty excited about that story, but I haven't signed paperwork, so I can't say much yet. What I can say is that you can find more of their adventures in the Clockwork Legion novels and in my story "Reckoning at the Alamo" which appears in the anthology Lost Trails II: Forgotten Tales of the Weird West edited by Cynthia Ward.

"The Jackalope Bandit" features U.S. Marshal Larissa Seaton and her mentor, Professor M.K. Maravilla. Both characters play important roles in my Clockwork Legion novels, Owl Dance, Lightning Wolves, and The Brazen Shark. In my fictional, steampunk world, Larissa is the first woman to be appointed a U.S. Marshal in 1877. In fact, she only predates Phoebe Couzins, the first woman in history to hold that job, by seven years.

Karen J. Carlisle
All That Glitters was an original short story, written specifically for the Den of Antiquity anthology. But what was the thinking behind it?

As The Den of Antiquity project would feature steampunk writers from around the world, I was inspired to add some Australian flavour. I wracked my brain for weeks, trying to come up with an idea related to the theme: a den. In the end, it was inspired, as many of my stories are, by serendipity.

Earlier in the year, one of my short stories featured in an exhibition for the Adelaide Fringe, based on the local parklands and heritage. While researching the area, I found many interesting historical tit bits and inventions, perfect for future alternate history projects.

At the time the Den of Antiquity project was initiated, some of the local Adelaide Hills silver mines opened for an historical tour. The spark was smouldering.

After more research, I discovered there had been gold mines in the Hills, not far from home -- including the Lady Alice Mine, which persisted from the 1850s to 1897. It changed hands several times, the last lease holder (albeit briefly) was Mary Ann Lynch.

The fire was lit. I’d base my story on a small gold mine (with much potential for steampunkery and gadgets) owned by a local woman, add in an alternate historical bent and fold in allusions to a dragon’s den, and its hoard. Perfect.

The main characters in my story are Alice and Soo Lin. Both were created specifically for All That Glitters. Alice (named after the historical mine) is an independent woman determined to eek out as much wealth as she could from her claim. She represents the pioneering women who often had to fend for themselves

Soo Lin is based on a composite of people found in South Australia at the time; a Chinese woman, abandoned by a husband who absconded to the Victorian goldfields in search of gold and riches.

After the Victorian government passed an Act to restrict the immigration of Chinese, in 1855, most Chinese sailed to Port Adelaide and made the long land journey to Victoria. When the South Australian goldfields proved meagre, many men left their farms, shut down shops and businesses, even deserted ships, following the lure of gold into Victoria. Many were listed in the local Police Gazette. Many women were left destitute in a decaying economy. Fortunately, Soo Lin can use her expertise in explosives, to help Alice in her mine.

I enjoyed researching and tinkering with the local history for this project. Some will make an appearance in my next series, The Department of Curiosities.

Who knows? Perhaps Alice and Soo Lin will make an appearance?

N.O.A. Rawle
Hark! Hark! was the second attempt at writing a story for the anthology. The den in the story was inspired by the ski chase scene in James Bond adventure On Her Majesty's Secret Service, although there is no ski chase scene in the story! I wanted a cold icy feel outside my den and the warmth of roaring log fires on the inside. I did spiced tea rather than hot chocolate, but it does not have the warm comforting effects that you might imagine.

As for the characters in Hark! Hark!, they were inspired by a picture from an a childhood nursery rhyme book illustration for the rhyme of the same name. I did a little research into the rhyme that accompanied the picture and found out that the cry of "Hark! Hark! The dogs do bark!" was a warning that strangers were in the area, dating back to plague time. How I got from there to the Avianou, royalty with species issues and an attack from outer space, I cannot really remember. It is my intention to continue the story of Odan Mackenzie and Princess Petaxi, I like the chemistry between them and want to know what will develop. Whether this will be as a series of short stories or a novella, only time will tell.


So what are you waiting for? Donate and get your copy today! 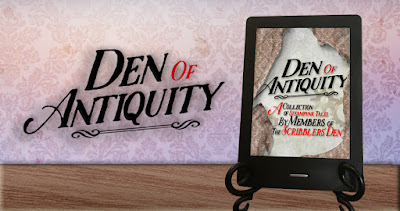 Email ThisBlogThis!Share to TwitterShare to FacebookShare to Pinterest
Labels: charity, Den of Antiquity, stories behind the story