At some point in time you may have mused on the romantic idea behind pirates, adventure on the high seas, stolen loot and buried treasure. Rie Sheridan Rose takes those romantic notions one step further in her fantasy novel Mutiny on the Moonbeam, published by Mocha Memoirs Press. 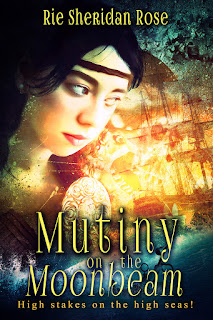 When Branwyn St. Clair stands up to her step father and stows away aboard the Moonbeam, she doesn't realise that it will lead her to to a life of adventure and pirating. Johnny Pate, the only human on the elven crew tries to keep her safe, but there are forces working behind the scenes that bring them together in ways which even they can't imagine.

Throughout her blog tour, Rie Sheridan Rose has elaborated on the characters and their inspiration and motivation. I didn't read any of it until I got to the end of the book and to writing this review - it's like watching the film before reading the book - for me that just won't do! The characters pull you in and drag you helter-skelter through the adventure with them. Bran is feisty and determined, Johnny is bashful and love-struck, Captain Aidrian is cool and aloof (curiously, I imagined him as a Ralph Fiennes type, quite different to Rie's idea!) and the evil Leac is just plain selfish and mean. There are fairies too flitting throughout the story, driving it along. I will not write too much about them as they are somewhat of a surprise and you will enjoy discovering them as you read! Queen Mab lurks in the darkest corners of the ship and the story but her finale is the best of all and you too will grow to love her.


I thoroughly enjoyed Mutiny on the Moonbeam; it's a quick read and suitable for lovers of romance, fantasy and young teens too.

*I was given a copy for review, by the publisher.

Eye of the Beholder The Adventures of Viola Stewart no.4 by Karen J Carlisle is available as an ebook from Amazon and other online sources. 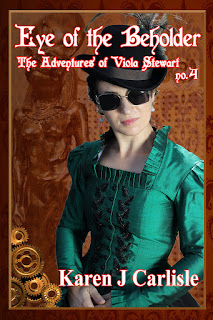 Eye of the Beholder is the forth book in the Viola Stewart series written by Australian Steampunk veteran Karen J. Carlisle, I won this novella in a competition, and I was mightily pleased I did!

Viola Stewart, optometrist-come-detective, is caught up in murder mystery steeped in mythology and superstition when she volunteers to unveil a sarcophagus at the British Museum. Risking life and limb to get to the bottom of the mystery, she dashes through the streets of London with the guilt of what has happened to her sister and a blood thirsty murderer hot on her heels. Can she find the culprit before becoming the next victim?

I was deeply reminded of Miss Marple whilst reading this. Not only is Viola Stewart the most unlikely detective, but her wit and her perception are also razor sharp! With her fiancé Henry as her side-kick and moral support, there is absolutely nothing she cannot do. She has fears and doubts enough to make her believable, but her clarity of mind excels. Carlisle’s writing style is fast paced and easy going making In the Eye of the Beholder a very relaxing read. Costumes and settings are described in lush detail so that one can almost feel the Victorian era seeping from the page. Steampunk elements are scattered subtly throughout which make the writing accessible to whodunit fans that have are not familiar with the Steampunk genre. Not having read the previous three books in the series, I was a little lost with the references to her sister’s misfortune, but I assume these questions are answered in the earlier books and that the issue will be resolved in future ones. Be certain that this aspect will only serve to pique your interest rather than detract from a wonderful reading experience!

This is the perfect read for a winter weekend. Grab a cup of tea and settle down with your favourite dunking delight and let Viola Stewart take the reins of your imagination for a while.


Gaslight and Grimm edited by Danielle Ackley-McPhail and Diana Bastine is published by eSpec Books LLC is available both as an ebook and paperback. 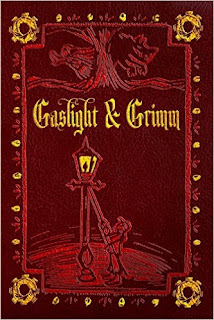 Gaslight and Grimm is a collection of fairy tales you know and love ‘punked’ into unimaginable guises. From the sultry seduction of the Big Bad Wolf in James’ Chambers’ take on Red Riding Hood, ‘In Wolf’s Clothing’ to Jody Lynn Nye’s poignant portrayal of dancer's desire to become prima ballerina, in ‘The Perfect Shoes’ based upon The Red Shoes, there are variations to suit all tastes. Each writer has wrought their own style upon Grimms’ work. David Lee Summers brings a touch of the East to The Dragon and His Grandmother in ‘The Steam Powered Dragon’. Kelly A. Harmon adds a touch of gritty egalitarianism to Hansel and Gretel in the heart rendering ‘All For Beauty and Youth’, while Gail Z. And Larry N. Martin herald and end to desolation and despair with their version of the Billy Goats Gruff, ‘The Patented Troll’. Other authors and tales are: Christine Norris, ‘When Pigs Fly’; Bernie Mojzes, ‘From the Horse’s Mouth’; Danny Birt, ‘The Steamy Tale of Cinderella’; Jean Marie Ward, ‘The Clockwork Nightingale’; Jeff Young, ‘The Walking House’; Elaine Corvidae, ‘Cat Among the Pigeons’; Jonah Knight, ‘The Giant Killer’ and Diana Bastine, ‘The Hair Ladder’.

Throughout Gaslight and Grimm, the stories are illustrated with the delicate woodcuts of Dustin Blottenberger which add a further folkloric feeling to the collection of super, sinister and delightful tales.

If you love the grimness of Grimm and the weird whimsy of Steampunk them this anthology will be a most pleasurable experience. Should you love Grimm but have yet to venture into the weird realms of Steampunk then here is enlightenment!

Calling the Reaper by Jason Pere, published by Rambunctious Ramblings Publishing Inc., is available as e-book and paperback. (I was given a proof copy for review purposes) 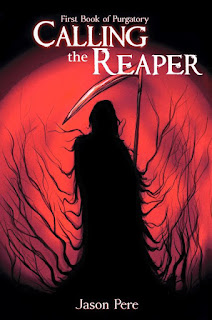 Calling the Reaper, Jason Pere’s debut novel and the First Book of Purgatory, is a work of epic fantasy at its best.

The Valkyrie and the Reaper are gathering souls to fight in a grand tournament in Death’s court, like the gladiators of old. This is the story of how those souls come to end up in Purgatory. The stories of Captain Dante Ramos, pirate and swordsman extroadinaire, who defies Queen Isabella to seek an impossible cure, Aristo, the undefeated Preatorian Legionary, headstrong Lady Kathryn Petra, who wishes to succeed where others have not, and Kenji Rei, Fist of the Shoganate are strung together with those of Shiva, handmaiden to The Burning One, Gemmell whose bone sash proves him the greatest of the Valhallans, Marshall Jackson Bennett French and Knight of the Realm, Sir Lionel James. Mankind is set to fight for survival, to struggle for honour and stay true till the end. Through the eyes of eight heroes, Pere explores how life’s battles are fought and won and how victory can sometimes be our ultimate downfall.

Exploring the single theme from multiple perspectives, gives Pere ample opportunity to exhibit his prowess in descriptive writing. With battle scenes so detailed that I initially found it distracting, until I was carried away by the rip-roaring action. I was so drawn into the rich detail and background of each protagonist, that I was saddened as each hero’s or heroine’s story drew to a close with the ominous phrase “…today would be that day.” From the battle hungry Samourai warrior to vengeful pirate captain, each tale enthralls the reader with its vivid action and protagonists to root for. One by one the characters come to life and we learn about their honourable actions and greatest failings, their joys and regrets. I was impressed to see the female characters pack a punch as willful and destructive as the men. Pere has managed to create three dimensional characters who will linger in your memory long after reading. That layered with the sticky heat of Southern jungles or the biting winds of the far northern steppes, and other tangible locations serve to build a solid plot and voluminous read.

These tales all underpinned by an all encompassing story of the Reaper and the Valkyrie who are preparing to do battle. The stories are linked with excerpts from Laurel, the Arch Valkyrie, Utania, Valkyrie of Peace, Heatha Valkyrie of Mercy Legend No More, the personal writings and missives of various Horseman, the Regent Envy, the Book of Life, the Book of Reaping, the Treaty of Greed and the Edict of Balance, all which serve to draw the reader back to the task at hand and remind us that there is yet more at stake than each individual life. If anything, it was these parts that I enjoyed least, not because they were badly written or even close to it, they simply weren’t as enthralling as the stories of the eight protagonists.

Calling the Reaper is a work of fiction that will grab your attention, suck you in and leave you wanting more.