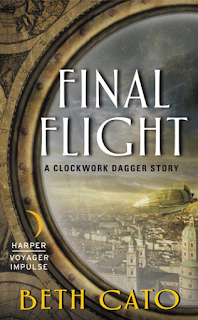 First of all, tell us a little bit about the last story in the Clockwork Dagger series, ‘The Final Flight’.

This story follows a minor character from the first book in my series. Captain Hue of the airship Argus had a hard time of it in The Clockwork Dagger, but now things are even worse: his ship has been commandeered by a Clockwork Dagger and Caskentian soldiers as part of some sort of covert mission. Hue's teenage son is aboard, too. Hue wants his boy and his crew safe, but the danger only escalates.

I love how ‘Bready or Not’, your baking blog, appears as a bakery store in the second novel ‘Clockwork Crown’ and that there are even off-shoot recipes that can be baked at home from the novella ‘Wings of Sorrow and Bone’. Will there be any more culinary delights in the last in the series?

Alas, no! Sometimes baked delights don't quite fit with the voice of the story. I do have other stories and poems that continue to explore the wonders of things like cardamom and pie. The theme is alive and well.

When you conceived Octavia Leander, did you imagine that she would reach such great heights?

When I first started writing about Octavia, I just plain wanted to write a book that was good enough to sell to a decent publishing house! I found my agent with another book that we couldn't sell, and wow did that hurt. I was afraid I would never be a published novelist. Octavia gave me a chance to prove to myself and everyone else that I could do this.

All of your characters, Octavia Leander, Alonzo Garret, Mrs. Stout, Rivka, Tatiana Garret, to name but a few, are very credible; where do you draw your influences from?

From other characters in literature or on TV, from people I've known, and combining all of the above. Mrs. Stout is probably my character most strongly based on another character--Mrs. Slocombe from the old British comedy Are You Being Served? I even kept the vividly coloured hair as a blatant tribute. Tatiana is heavily based on another girl I knew as as child, who will go unnamed for obvious reasons as Tatiana is not the most pleasant of people.

There was, to my mind, an increased ‘steampunk influence’ (more mechanisation and industry) in the ‘Clockwork Crown’. Was this due to the developments in the plot or for other reasons?

The increase in technology was really about setting more than anything. My agent was originally rather concerned that the steampunk element in Clockwork Dagger was too light and it might hurt our ability to sell the book. It's a valid concern for sure. I really needed things to stay as they were, though, so that I could eventually show how the kingdom of Caskentia in my first book has regressed because of fifty years of brutal war against the Waste. The southern nations, as shown in Clockwork Crown, are far superior in both technology and education.

Now that the final story in the Clockwork Dagger series is completed, how do you feel?

Relieved that the contract has been fulfilled, but sad, too. I don't want it to be the last story I write in that world, but I know I won't have the chance to return to there anytime soon. I'm working on my new series now that starts with Breath of Earth.

There is an altruistic streak in you Clockwork Dagger series, a love of nature (Worshipping The Lady) and animal rights (Rivka’s emancipation of the Gremlins). Are these messages intentional in your work?

Oh yes. I really want my characters to be passionate about causes that are bigger than them. I've had a lot of readers say they are pleasantly surprised at how the Clockwork Dagger books handle faith in a positive way. I read slush for a magazine, and I was amazed at how many stories followed the trope of "religion is bad! This preacher is really evil!" I wanted to turn that around. I started writing about Rivka while I was still unsure about how she could possibly succeed in saving the gremlins from foul experimentation, but I knew I had to find a way. I'm the proud owner of cats from the SPCA. I really want creatures of all sorts to find happy, loving homes.

As well as the successful steampunk Clockwork Dagger series, you write very lucid poetry and have a plethora of stories published in other areas of the speculative fiction field. Which is your favourite genre to write in?

Fantasy. I have never lost that childhood need for magic to be real.

What can your readers look forward to later this year?

Well, "Final Flight: A Clockwork Dagger Story" is out on April 26th. I have other stories and poems that will be published throughout the year, but the big event is the release of my novel Breath of Earth on August 23rd.

You have already expressed you delight over the Nebula nomination. Where do you intend to go from here? Are there any other awards you've dreamt of?

Actually winning a major award would be nice at some point. So far, I'm 2 for 2 on losing big awards, and I'm pretty certain the Nebula Awards will give me 3 for 3. I'm cool with that--the other novellas are amazing! Someday I would like to nab a Nebula, though. Legally. Without, you know, grabbing an award and making a run for the airport.

As many of my readers are writers, what advice can you give them?

Stay stubborn. This is a tough business no matter what route you take. Believe in yourself and your writing, fight to improve your work, and slog onward!

Thank you for talking to me and good luck in nabbing that Nebula.

Beth hails from Hanford, California, but currently writes and bakes cookies in a lair west of Phoenix, Arizona. She shares the household with a hockey-loving husband, a numbers-obsessed son, and a cat the size of a canned ham. 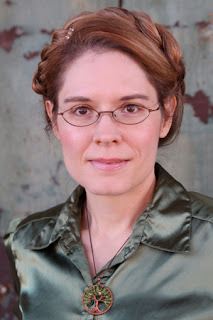 The Final Flight is available for pre-prder from: Amazon.com & Amazon.co.uk
(Follow the links throughout the interview for Beth's other books.)
Her site: http://www.bethcato.com